Against all odds, Ruby has survived the catastrophic onset of the killer rain. Two weeks after the radio started broadcasting the warning, “It’s in the rain. It’s fatal and there’s no cure,” the drinkable water is running out. Ruby’s left with two options: persevere on her own, or embark on a treacherous journey across the country to find her father—if he’s even still alive.

AWARDED A ‘PERFECT 10’ BY VOYA MAGAZINE 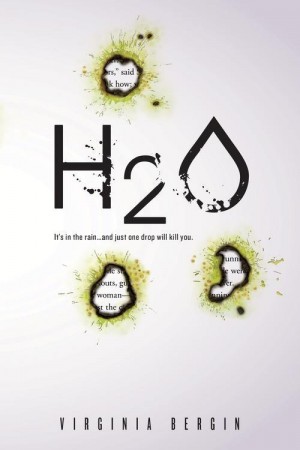 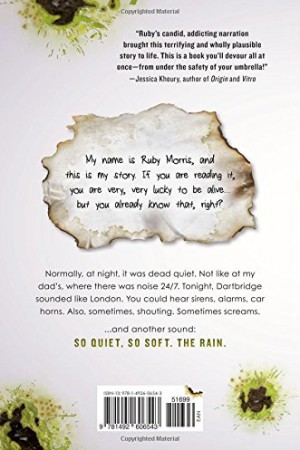 “The Rain left me speechless!” (Alice) “this is superb!” (Lola) “This is a must read book.” (Sarah) “The Rain is an amazing book. It is very creative and exciting.” (Verity) “This book is one of the most moving and funniest books I have ever read.” (Katie) “I had a golf ball sized lump in my throat from the moment the rain began to fall but I could not tear my eyes from the page.” (Delilah) “an incredible novel that was different to anything I’ve ever read.” (Izzy) “I loved every part of this book it was amazing!!!!!” (Imogen)

“You NEED to read this!” (MP!ER Katie) “I am glad I took a chance with this book as it was a book that I couldn’t bear to put down as I kept wanting to know what would happen next.” (MP!ER Beth) “The Rain takes you on an epic, emotional journey” (MP!ER Roisin) “The author of this book is a very talented person and she should keep it up.” (MP!ER Areeba) “The book makes you laugh as well as want to scream… in a good way.” (MP!ER Jennifer)

“I’m sure there are plenty of 16 year olds out there who would become worldly wise overnight if faced with such a thing, who would immediately drop all the teenage angst and become an adult immediately, Ruby is not one of them and for that I adored her.”

“Tense, scary, and high emotion, The Rain will have you on the edge of your seat and afraid to step outside.”

“So, in a post apocalyptic sense, the reader is left pondering over impossibilities and uncertainties, and then imagine that story written with a new danger and fresh ‘journey’, and you’ll probably sum up The Rain fairly well.”

“Funny, heartwarming, cringy, sad and terrifying, it is truly amazing.”

“I can’t stop thinking about this book. Virginia Bergin’s The Rain is unlike any apocalyptic novel I’ve read, mostly due to the hilarious and quirky but utterly believable narrator Ruby Morris.”

“Not a novel about the British summer but a nightmare vision of the future where a single drop of rain can kill. Ruby Morris has survived so far but she needs to find her father and she could really do without being stuck with Darius Spratt.”

‘Bergin presents Ruby’s story as a firsthand document of life after widespread disaster. The diary-style narration emphasizes Ruby’s distinctly teenage response to society’s end—she rescues too many abandoned pets, loots her favorite boutiques without shame, and holds tightly to the unlikely hope that her father is still alive—and her strong, spontaneous voice lends a touch of dark comedy to the post-apocalyptic doom and gloom. The challenges Ruby faces on the road to locate her father are significant, but watching Ruby draw strength from her ability to tell her own story is as inspiring as it is harrowing.’ (THE HORN BOOK MAGAZINE)

‘Ruby’s candid, addicting narration brought this terrifying and wholly plausible story to life. This is a book you’ll devour all at once–from the safety of your umbrella!’

‘Creepy and realistic. H2O left me thirsting for more.’

Imogen Russell Williams, reviewer for The Guardian Online and Metro

Back to The Rain