THE END OF THE WORLD WAS JUST THE BEGINNING . . . 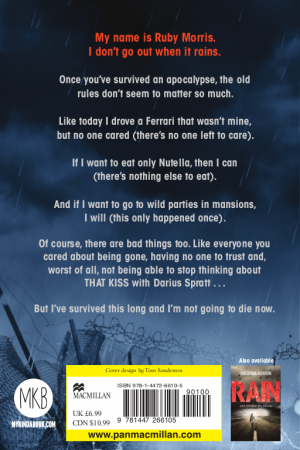 Reviews for The Storm

“Compelling sequel with plenty of humour as well as sad, poignant bits & a heroine who becomes more likeable as she grows in self-awareness. Well worth having.” (H. Middleton, Librarian) “I LOVED this book. . . This is every kind of fantastic that it could possibly be.” (Waterstones Bookseller) “Arrgh! I read this book too quickly! . . . It’s hard to write a review without giving to much away, all I can say is have tissues at hand and enjoy.”  (Waterstones Bookseller) “I adored this book and will be forcing it into everyone’s hands when they come into the store, young or old!” (Waterstones Bookseller, Dorking)

“The Road for this generation of stroppy, growing-up-too-quickly iPhone-owning teens, and a roller-coaster ride for those of us who occasionally like to forget how old we are and, putting aside our hard science fiction, dive into something different.”

“It’s compelling reading, and Ruby is a really appealing character, her sense of humour a constant counterpoint to the horror of the situation; basically, as she’d say, you really root for her to save the world.”

“The Storm has enough twists and turns to keep you happy and is definitely a gripper (good luck trying to put it down) whilst being unpredictable all the while. . . The Storm is an incredibly realistic spin on the world as we know it and certainly leaves you wanting more.”

“Overall a really really terrific read – I stormed through it (yes that was on purpose) and adored every sassy super moment of it.”

“This book was so much more action packed and crazier than the first book! Seriously it was so mysterious and crazy! Great! I loved Ruby’s development between the first and the second book and I love her vast knowledge and how strong willed and adult-like she is in this book!”

“I’m struggling to put into words how much I love this book . . . Virginia Bergin’s humorous writing style is absolute genius.”

US edition and translations