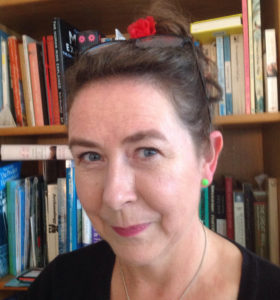 Born 1966, Abingdon, Oxfordshire, UK. Studied psychology and (briefly) fine art/film and video at university. I have had lots of different jobs – so many I’ve lost count – and I even got paid to write for documentary, corporate and e-learning projects.  I live on a council estate in Bristol, UK. Er . . . and I like science, archaeology, nature, art and walking.

I hate writing a bio. It’s not at all like telling a story; there are far too many facts involved, too many dull bits, too many overly-complicated bits – and, worst of all, the main character is me. I never know quite how to describe myself. So . . . maybe I’ll begin at the most recent version of The End and take it from there:

In 2014 I got published for the first time (The Rain/H20). I never expected it to happen. I wanted it to happen, I felt like I needed it to happen, but I didn’t expect it . . . and I had no idea – none at all – about what it would be like to become a published author. My life changed overnight. And I was fairly shocked about it. Why?

Becoming a writer was alien to the world I grew up in. I was born in 1966 in Abingdon, Oxfordshire, UK. My parents came from Liverpool, grandparents from England, Ireland and Poland. When I was a child, I lived in my imagination. I was happy there! I loved reading and I loved writing stories . . . and it all came crashing down at the end of secondary school when I realised you couldn’t do creative writing at A-level. This is way before the Internet; I had no clue at all about how authors came to write books. I would never have asked teachers for advice – it just wasn’t like that back then! – and my parents would have thought ‘creative writing’ was a complete waste of time. The purpose of education was to pass exams and get a good job – ie to avoid being poor.

No one ever told me, People like you don’t become writers . . . but they didn’t have to. My whole, small world screamed it.

So I stopped writing for about 10 years. I tried to be another person, I suppose. It didn’t go that well. I barely attended college and flunked (spectacularly!) my first year of science A-levels – apart from psychology, a subject I chose because I was – and still am – fascinated by the human brain. I started over – studying humanities – and almost flunked again. My English literature tutor called me in and warned me I’d be kicked out unless I did the coursework . . . so I did a year’s worth of reading in six weeks. My essay on Graham Greene’s The Spire made me fizz: ‘We’re mayfly!’

You might think that having realised our lives are so short and so you might as well at least try to do something with it would have shaped my life from there on in . . . but no. People like me don’t become writers. I managed to get into university and I studied psychology, because that seemed like a sensible thing to do. I did pretty well and I left and I got a good job. It was secure and it was well paid . . .

I went part-time so I could do art. It wasn’t my thing, but I got through a foundation course and some way through a degree before I realised it – thanks to a wonderful person called Mary-Pat Lees. She was my film tutor at Central St Martins and, one day, she decided to set a writing exercise . . . and I cried. I realised how much it hurt to have left a thing I loved. To have ignored it for so long. To have tried to pretend I was someone else. I quit art school and started writing again.

Poems came first. Then short stories. Then film and TV scripts; I thought these stood a better chance of making some money – and I needed to make money because the more time and effort I spent writing, the poorer I got. I tried so many different ways to make it work, to find that elusive combination of having enough money to get by without wrecking the writing time I craved. Financially, things got desperate. Really desperate. And my writing got nowhere – at least not in terms of being published or produced. (I do think no word is ever wasted; the more you write, the more you learn.) The reason I talk so much about this, the financial and class/background side of writing, is because I wonder – with an aching heart – how many stories are lost for these reasons. It can be incredibly hard to keep going.

I was on the brink of quitting (for the umpteenth time) when, in 2013, a teen friend handed me a copy of The Hunger Games and said I had to read it. I read it, and I thought it was very good indeed, and I realised that in all my trying to succeed I had somehow forgotten the sheer joy of losing yourself in a story – and I had a story I couldn’t wait to tell.

The Rain (H2O in the US) and The Storm had started life as my attempt at a Hollywood blockbuster film script in 2008. I loved the idea so much, but it had no heart . . . so I’d shelved it. I grabbed it back off that shelf – and Ruby, who just appeared on the page out of nowhere, gave the story heart. Afraid I’d run out of money before I could get to the end, I wrote in a frenzy, and when I did get to the end, I did a very stupid thing: I sent it off to a publisher.

Never do this. I can assure you that writing is re-writing, and that the first draft of anything really is rubbish. I don’t usually show anyone a first draft. It is too risky. It is not ready. I think I got away with it because that story had been in my head for so long, because Ruby was such a strong, distinctive character and because I’d had years and years and years of writing practice. (Oh, and it did need re-writing!)

To my complete and utter amazement, I had an offer from the publisher. Then I got an agent (the excellent Louise Lamont at LBA Books). Then I had more offers – and Macmillan bought Ruby’s story. I was in a state of shock . . . and my life changed overnight.

Also it did not.

I still spend hours and hours sitting alone in a small room trying to put stories that I’m seeing, smelling, hearing, touching, tasting, thinking, feeling into the right words. This is my job now – and, as with all jobs, I have days when I wish I was doing something else. I have days when it feels too difficult, when the story and I feel like strangers, a million miles apart.

That’s where you come in. The way writing is for me, I’d get over the tricky days, eventually, and I’d trundle on . . . but you are out there. You, the reader.

I am very grateful to you for reading. I can’t say that I will always write to please you. I can’t say that because stories don’t let you do that. Stories just demand to be told. But I know you’re out there. So . . .