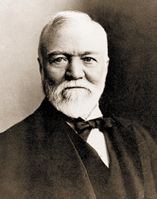 The Rain has been nominated for the 2015 CILIP Carnegie Medal.

When I was growing up, we didn’t really go to bookshops.

If we had book vouchers, we went to a shop called WH Smith; if we had cash, we went to the charity shop (Oxfam!).

The rest of the time, every week – every single week – we went to THE LIBRARY.

If you clicked on the CILIP Carnegie Medal link, you’ll have seen this already: Andrew Carnegie (1835-1919) was a Scottish self-made industrialist (who made money in steel in the USA). He gave away 90% of what he made. He went to the library when he was a kid . . .  and later vowed, “if ever wealth came to me that it should be used to establish free libraries.”

There are more than 2,800 Carnegie libraries across the English-speaking world.

I feel honoured that The Rain has been nominated for this award.