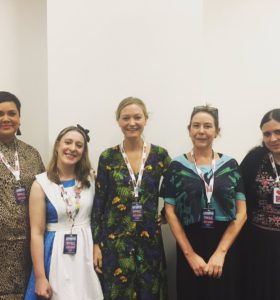 It was brilliant. As usual.

(Even if I did have a hideous, snotty cold.) (Send sympathy/soup/more tissues.)

I did two events at the UK’s Young Adult Lit Con at the London Film & Comic Con, 28th-30th July:

That’s the thing about YALC: it’s not about a schedule of events (tho’ these are pretty fab), it’s about people meeting each other. It’s spontaneous and fun – and full of the unexpected.

Thanks to all: to everyone who came along to the panel, to the readers whose books (and bags and posters and notebooks) I got to sign, and to the writers – it was a pleasure to meet you.

This made me laugh, though – accidental State of Grace (Rachael Lucas) and Who Runs the World? poster conversation spotted by Louise (my agent) on Macmillan’s My Kinda Book stand: 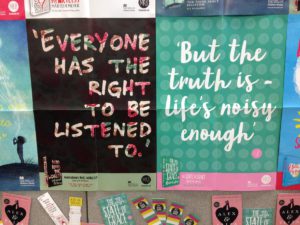